Getting the following error when trying to initialize image bmp = wx.Image(“image.png”)

This is only happening with windows Region = “Spanish (Latin America)”

In fact, what I noticed is that the issue only happens when Windows Region language is set to a language that doesn’t exit in wxWidgets: interface/wx/language.h File Reference

The only (ugly and hacky) workaround that I found looks like this:

Is there anything I’m missing? As mentioned, issue is only happening with certain language settings.

The full code to reproduce

Interestingly, this step is only required in Python 3.8

Yep, the change that started causing this problem turned up in Python 3.8.

The only (ugly and hacky) workaround that I found looks like this:

…
Is there anything I’m missing?

I’ve been thinking of trying to simplify InitLocale much like this, instead of trying to bring the C runtime and wxWIdgets into sync with what the system thinks should be the default. I’ve made the following change in a test app that shows the problem for me, and it works fine, but I’m in a US locale and don’t need to do anything related to the locale other than this.

So for those that are using non-US locales, especially if you also need to create a wx.Locale for access to message catalogs, or other locale specific things please try the experiment and let us know how it goes.

The experiment is to simply add the following method to your wx.App-derived class. If you also need to set an explicit wx.Locale then do so after the code above, and remember to hold on to the reference to the wx.Local object.

Please reply with how it works for you, and if it doesn’t help then also reply with any clues you may have discovered.

I get a similar issue with wxPython v4.1.1 while v4.0.7post2 works fine.
time.strptime throws ValueError after initializing the locale. This is Python 3.8 on Windows 10.

The function InitLocale is working for me!

Thank you for the workaround - I was really struggling on how to solve this. 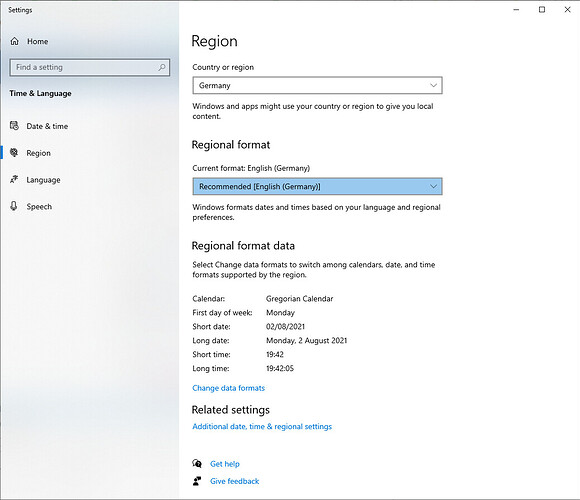