Do you see this when running the wxDemo or just with your own code? If it shows up in the demo then someone with a suitable system could possibly debug it but if it is only in your code they would
need a minimal sample that showed the same problem. (Sorry no access to a Mac here).

On Behalf Of Mel Tearle 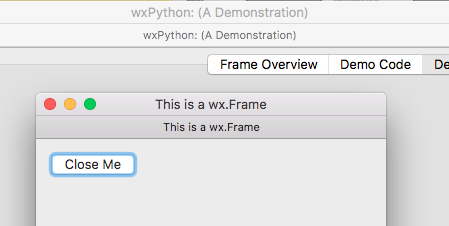 Good news as far as someone being able to debug but as I don’t have a Mac all I can do is say that it is not an issue on Win10.

On Behalf Of Mel Tearle

It seems like you must have meant that you see this with Frame.py from the demo, but it might be helpful to verify that you see this behavior with https://github.com/wxWidgets/wxPython/blob/master/demo/Frame.py

Mel, does your Mac have some non-standard or at least non-typical settings that might be causing this? Like perhaps some assistive services, or maybe the app is actually running on another machine as is shown in a virtual desktop or similar on your machine?

There has been a report of something similar on a specific Linux distro (but not on any others) https://github.com/wxWidgets/Phoenix/issues/698 but I doubt that it could be related since something like this would seem to be happening at a much lower level than the wxWidgets code and then you’re at the platform specific layers.

I upgraded to Mojave and it didn’t change anything - however, it may be my display.

I didn’t see anything in assistive services and I’m pretty sure this is the only instance running.

I can replicate this – there is a Show Tab Bar and Show All Tabs added to the View menu in my app, and if I do Show Tab Bar it is shows the extra title-bar-looking item.

I think (but haven’t implemented the method yet) as a workaround to use PyObjC with the main window (which in my case is the only window I would worry about). The code would be the PyObjC version of something like is posted here https://stackoverflow.com/questions/39399553/how-do-i-disable-the-show-tab-bar-menu-option-in-sierra-apps :

In particular this code:

to tell the window that it doesn’t support the new native tab bar.

I think the top level NSWindow handle is accessible from wxPython, just figuring out the syntax for the method call then is the trick.

This is a Mac only thing. My app doesn’t seem to show it by default, but I don’t have my Finder prefs set to show it.

The PyObjC bridge should be able access the ObjC runtime and do this. At least I think so. ?

(I just haven’t gotten around to doing this yet!!)

I have not looked to see if wxWidgets has a flag for this yet or not.

So this is nothing to do with whatever particular video card/etc. you have on a Mac - I think whether you see it by default depends upon your Finder preferences and those only apply to 10.13 and 10.14. The stackoverflow post also shows how to check the AppKit versioning to see if the OS has this capability (and I can do that in PyObjC).

To Matt and Hubert. Thanks for your suggestions. I’ve looked in every place I could and couldn’t find any switch

other than in Apple;s Terminal App that let’s you hide the tab bar. I’ll suffer along with my little problem till I find a solution or buy

another computer, making sure I don’t have that problem with it.

If you open System Preferences, then go to Dock, there is a spot there for it called Prefer tabs when opening documents. Mine is set to Full Screen Only, and I don’t see the tab bar unless I explicitly turn it on.

Hi, Thanks again, I tried it and no difference. I’m wondering if there’s a way to set the tab bar height to zero using some existing wxpython method. Some form of a frame modifier.

No. It's not up to you -- or to any application -- to make that change. It's a USER preference. It's up to the user to enable or disable this feature. If he has this feature enabled, then that duplicate title bar is exactly what he WANTS to see. Leave it alone.

I found a solution. The one place I hadn’t looked was the Python Launcher. I opened preferences and eventually clicked on ‘Reset to factory settings’ which fixed the problem both in the demo and with any code I ran from the command line. No more duplicate bar. Just wanted to pass that on. 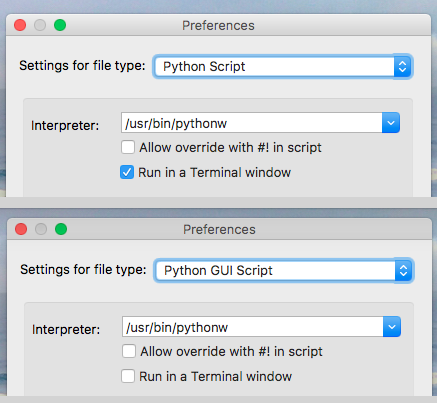 No. It’s not up to you – or to any application – to make that change. It’s a USER preference. It’s up to the user to enable or disable this feature. If he has this feature enabled, then that duplicate title bar is exactly what he WANTS to see. Leave it alone.

I’ve got the same issue and I don’t buy this. It really isn’t a preference I (as a user) wanted and no other application is giving me this duplicate menubar or an extra entry in the View menu to Show/Hide it. It’s an issue in wx. For me the Python Launcher solution didn’t work either.